Get Email Updates from Dirtbikes.Com 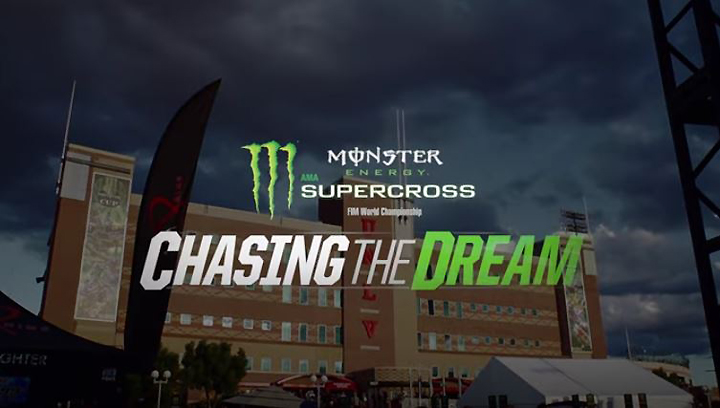 If you’re a hard-core supercross fan, then you’re probably well aware of the Chasing the Dream television series that provides a behind-the-scenes look at the Monster Energy AMA Supercross Series and its key competitors.

Chasing the Dream – Xtra distills some of that footage to create interesting webisodes for those of us who are addicted to our computers and mobile devices–and hey, who isn’t?

Right on time, in advance of the 2016 Monster Energy Cup, the October edition of Chasing the Dream – Xtra highlights the happenings from the 2015 version of this stand-alone supercross event that boasts a unique three main-event format in which the winner has the chance to walk away with a cool $1 million payday. All he has to do is win all three main events. Sounds simple enough, right?

In this webisode you’ll see it isn’t. The show recounts how Rockstar Energy/Husqvarna Factory Racing’s Jason Anderson crossed the finish line first in the first MEC main event of 2015 but forgot to take the Joker Lane (a slower section of the track that every rider must take at least once after the first lap), handing the win to RCH/Soaring Eagle/Jimmy John’s/Factory Suzuki’s Ken Roczen by default. In Anderson smei-redeemed himself by winning the second main event ahead of Trey Canard in second and Justin Barcia, ending Roczen’s hopes for the “Monster Million.” Roczen dominated the third main event to become the 2015 Monster Energy Cup Champion, a title we hope to see him defend aboard his new Team Honda HRC CRF450R.

The 2016 Monster Energy Cup returns to Sam Boyd Stadium in Las Vegas on Saturday, October 15. The event will be televised live on Fox Sports 2, beginning starts at 6:30 p.m. PT/9:30pm ET.

x Cookie and Data Use Consent
We use cookies to improve your experience on this website and so that ads you see online can be tailored to your online browsing interests. We use data about you for a number of purposes explained in the links below. By continuing to browse our site you agree to our use of data and cookies.
Tell me more | Cookie Preferences