Get Email Updates from Dirtbikes.Com

Story and Photos by Steve Cox

The Monster Energy Cup was originally meant to be a bit of a toned-down supercross event, where not only the top racers in the sport could show up and shake down their new equipment for the following supercross season, while the track was also supposed to be kept mellow enough for the nation’s top Supermini and 250cc Amateur racers to take part in a relatively safe environment.

When the dust settled at the conclusion of the 2015 Monster Energy Cup, it seemed as if RCH Suzuki’s Ken Roczen is shaking things down quite well, as he posted a 1-4-1 score to collect the $100,000 check for the overall winner.

Rockstar Energy Husqvarna’s Jason Anderson actually became the first racer ever to grab all three main-event holeshots, which landed him a free 2016 Toyota Tundra. Anderson quickly gave way to Honda’s Trey Canard, who led the first couple laps before sliding out in the slippery conditions, handing the lead back to Anderson. Anderson hung on to take the win, but he had forgotten to take the Joker Lane at least one time in the 10-lap race and was relegated post-race to sixth place, giving the win to Roczen with Red Bull KTM’s Ryan Dungey second, followed by last year’s winner Davi Millsaps on the BTO Sports KTM, Yoshimura Suzuki’s Blake Baggett, and AutoTrader.com/JGR/Toyota Yamaha’s Justin Barcia. Canard ended up 10th. Last week’s Red Bull Straight Rhythm winner James Stewart went down early in the main, and after only catching back up to 18th, he called it a night.

Anderson soon turned his second-race holeshot into a win over Canard, who came through the pack to snag second by taking the Joker Lane early in the main so that when Barcia took it on the last lap, Canard was able to sneak by. Barcia held on for third in front of Roczen, Dungey and Millsaps.

Anderson’s holeshot in the final main event put him in the lead for a while. He came under pressure right away from Canard, but the two made contact before the finish-line jump, sending Canard careening into the manager’s tower. Canard was okay, and he remounted, eventually finishing 14th. Roczen quickly fought his way forward and found his way by Anderson before taking off for what seemed like an easy runaway victory over Dungey, Anderson, Barcia and GEICO Honda’s Christian Craig. 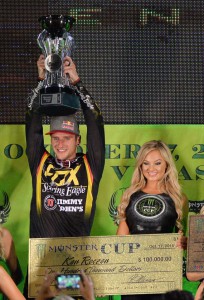 x Cookie and Data Use Consent
We use cookies to improve your experience on this website and so that ads you see online can be tailored to your online browsing interests. We use data about you for a number of purposes explained in the links below. By continuing to browse our site you agree to our use of data and cookies.
Tell me more | Cookie Preferences